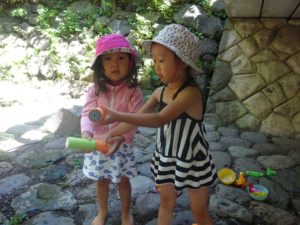 Come enjoy a different activity every day at our Spring, Summer and Winter school programs! We do activities such as cooking, crafts, cray fishing, zoo trips, shopping, treasure hunting etc. We welcome students of any English level to participate and join in the fun.

All lessons are conducted in English however our bilingual staff are ready to help if there’s ever an issue! It’s a great opportunity for first time English speakers to learn some basics as well as for native English speakers to brush up on their skills.
We make daily diary entries and collect all the craft and paperwork during class, then we compile it all together as an album and give it back to the children to take home on their last day.
These programs are available for anybody to attend. Not restricted to regular JUN students. So feel free to join us! Discounts are available for past students of JUN.

You can apply for any number of the days that you’d like.

【Items to bring to school: Lunchbox, a change of clothes & a show and tell item.】

*Note: You can apply for any number of days that you’d like.

Limited spots available. Contact us with your interest as soon as possible!